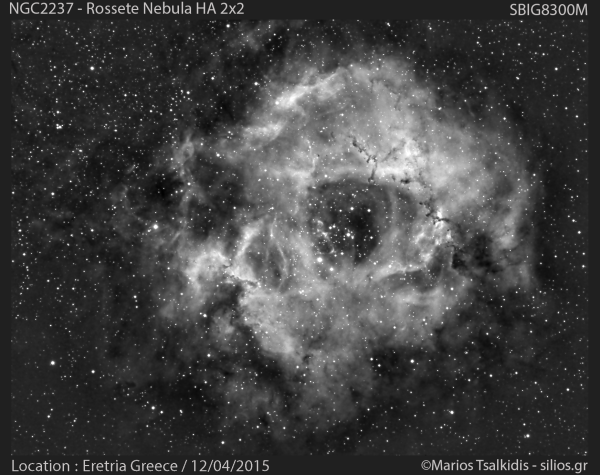 A quick go on this spectacular nebula, as it is currently too low on the horizon for serious light gathering.
I hope next year’s weather will allow more data!

The cluster and nebula lie at a distance of some 5,200 light-years from Earth (although estimates of the distance vary considerably, down to 4,900 light-years.) and measure roughly 130 light years in diameter. The radiation from the young stars excites the atoms in the nebula, causing them to emit radiation themselves producing the emission nebula we see. The mass of the nebula is estimated to be around 10,000 solar masses.
It is believed that stellar winds from a group of O and B stars are exerting pressure on interstellar clouds to cause compression, followed by star formation in the nebula. This star formation is currently still ongoing.
A survey of the nebula with the Chandra X-ray Observatory in 2001 has revealed the presence of very hot, young stars at the core of the Rosette Nebula. These stars have heated the surrounding gas to a temperature in the order of 6 million kelvins causing them to emit copious amounts of X-rays. 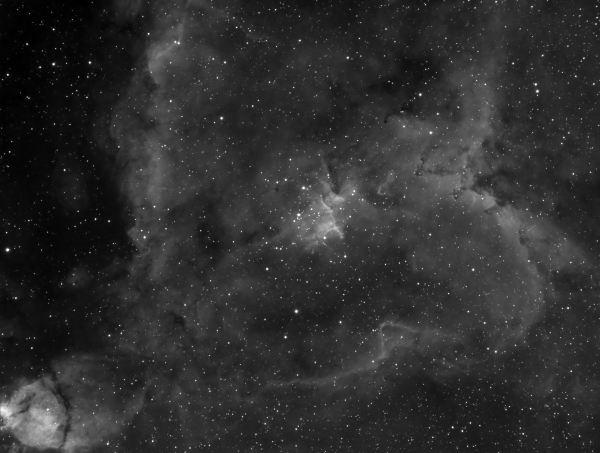 Here is a quickie of The Heart nebula or IC1805! Material for mosaic probably but I am waiting on the flattener/reducer before I begin with the big projects 😀
Technical details :

NGC 7380 (also known as the Wizard Nebula) is an open cluster discovered by Caroline Herschel in 1787. William Herschel included his sister’s discovery in his catalogue and labelled it H VIII.77. It is also known as 142 in the 1959 Sharpless catalogue (Sh2-142). This reasonably large nebula is located in Cepheus. It is extremely difficult to observe visually, usually requiring very dark skies and an O-III filter.

My first CCD attempt is the NGC7380 The wizard nebula in HA (for now) 🙂 It took 4 nights to gather the data, as I am still battling with meridian flips, ADU’s, Dark noise and the rest of the CCD parameters…